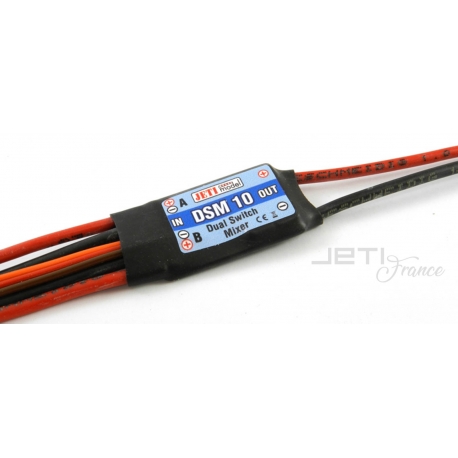 DSM 10 is an electronic switch for switching of two receiver batteries which are connected to one receiver. The product also includes a receiver current supply switch. Batteries that are connected to the inputs of the DSM 10 are permanently measured and connected with the aid of a hysteresis comparator either both to the output, or one of both batteries with the higher voltage only.

The DSM 10 exit consists of a MPX connector which can be used for direct connection of the exit to the receiver. The MPX connector is a fixed part of Duplex receivers with the label EPC (External Power Connector), receivers R14 and R18.

The DSM 10 is controlled by a magnetic switch which can be placed outside of the model airplane fuselage. By touching with a special magnet, the system becomes switched on or off. The electronic switch in switched on state is characterized by a minimum transitional resistance.